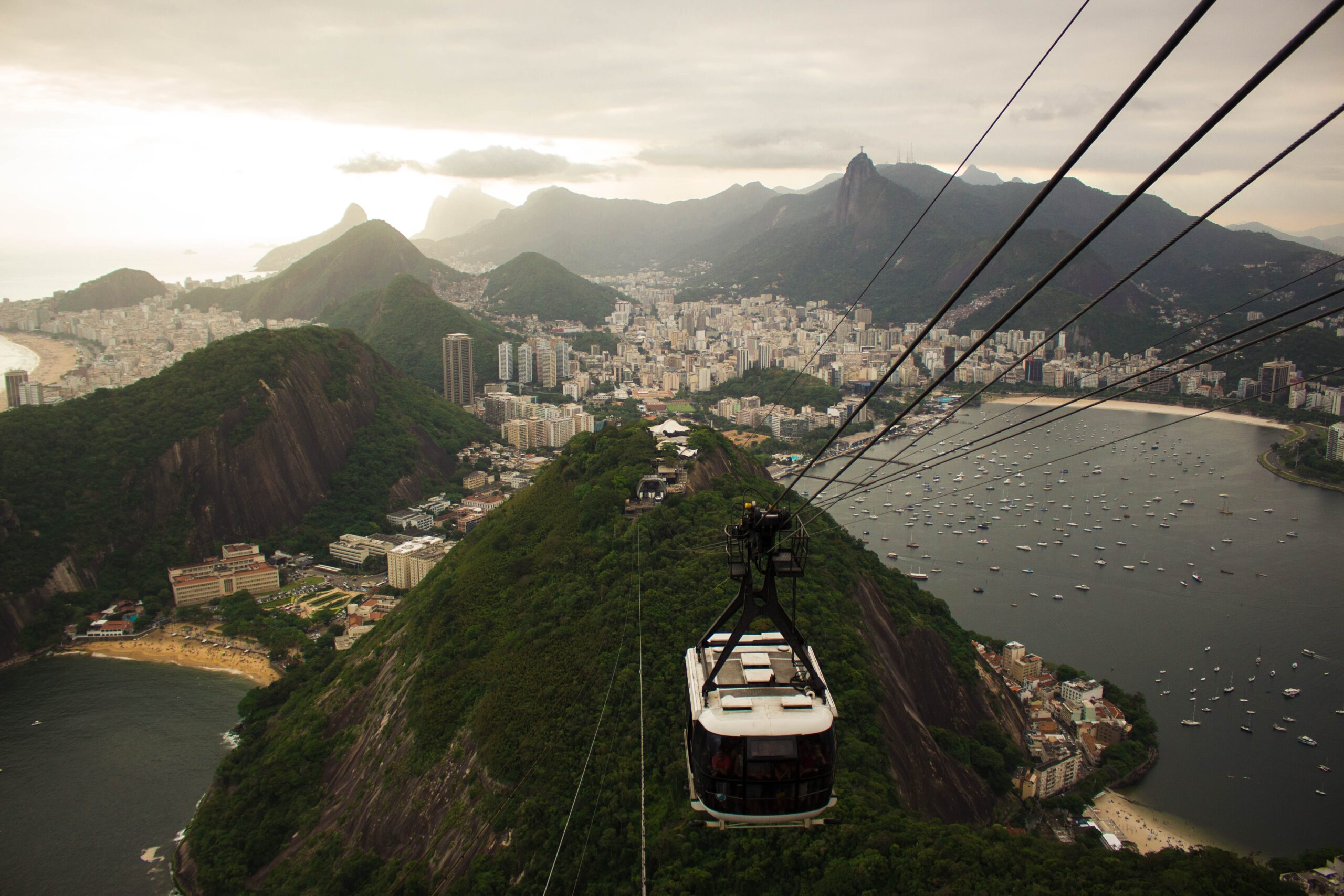 How to sell and succeed in Brazilian marketplaces

Therefore, Brazil is often the first choice for companies who wish to expand their business into Latin America. Despite the country’s economic downturn in recent years, there are bright prospects for eCommerce: the market is already valued at nearly 150 billion USD and is expected to expand at a compound annual growth rate of 30% through 2024. After a sharp rise in 2020, crossborder purchases now account for 21% of Brazil’s eCommerce.

Since eCommerce is larger, more competitive, and more developed in Brazil than in other Latin American countries, those who manage to succeed in this country can easily expand to the rest of the region.

If marketplaces dominate Latin American eCommerce, in Brazil they are rule supreme: 78% of its eCommerce market revenues come from these websites.

While the United States, China, and Argentina are all led by a single marketplace (Amazon, Taobao, and Mercado Libre respectively), Brazil has multiple platforms competing on a level playing field. Some of the most established players include: 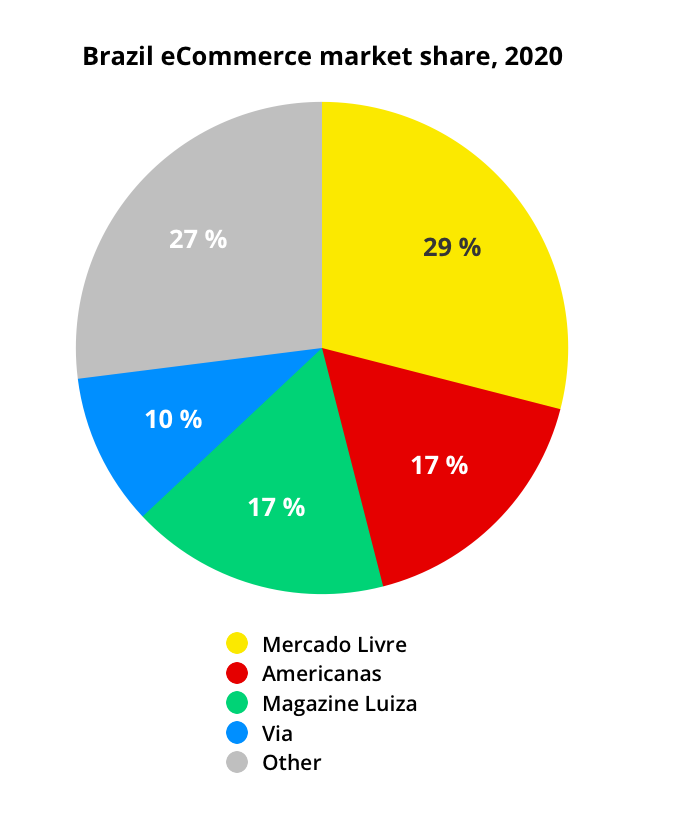 Since the COVID-19 pandemic began, Brazil’s explosive eCommerce growth has also attracted overseas websites like Amazon, OLX, Aliexpress, and Shopee, who are also now fighting for a slice of the cake. Local marketplaces have sought to maintain their competitive edge by offering imported products and allowing crossborder sellers to join their platforms.

Although Brazilian marketplaces receive dozens of millions of visits per month, selling on these platforms isn’t as simple as creating an account and posting your products. Among the millions of products that are listed in each marketplace, most visitors will only see the ones that match their search queries, or those that appear on the catalog’s first pages. In Brazil, 94% of visitors won’t go past the third page of a given catalog, and 56% won’t even get to the second page.

Therefore, to win the Buy Box and rank high on a website’s catalog you’ll have to become an established seller, noticeable by buyers, with a strong reputation. You’ll need to do better than your competitors in terms of price, delivery performance, customer service, marketing, and ratings. Only by optimizing your audience exposure will you be able to boost sales, yet most sellers fail to invest the time, money, and effort that are needed to do so.

2. Buyers are constantly on the lookout for deals

An increasing amount of marketplaces and e-retailers are trying to target middle-income buyers, who make up the bulk of Brazil’s population. Although these consumers expect high-quality products and tend to be loyal to their favorite brands, they’re also looking for ways to save money, especially since the COVID-19 pandemic began. If they like a brand, they’ll shop around to find their products at the best price, or even delay a purchase until the items are on sale.

As a result, businesses tend to compete on price. They target these buyers with coupons, discounts, loyalty cards, cashback reward programs, special offers, and other strategies that give their customers the sense that they’re getting the best value for their money. Brazilians look forward to different commercial events throughout the year to find the best offers, the most important of which is Black Friday, where sales peaked at 800 million USD last year.

In addition, a growing number of websites are catering to these deal-seeking Brazilians. On websites like Techtudo, Zoom, and Buscapé visitors can compare prices for the same item on different marketplaces, while on social networks such as Pelando and Promobit users can post coupons and discounts from various marketplaces, and then like and comment on these posts. They not only allow buyers to find the best deals but also exchange tips (“dicas”) on how to shop online, what to buy and which sellers are trustworthy.

3. Digital payments are more accessible than ever

In a country where 55 million people don’t have a bank account and 140 million people don’t have a credit card, crossborder payments can be problematic. International transactions are not allowed for most credit cards, and when they are, they often charge very high fees. Luckily, a wider variety of payment methods are being developed by both the private and public sectors, which are making payments faster, more secure, and more inclusive.

One of the most common ways of targeting unbanked consumers is through boleto bancário. This is a push-payment method for online purchases, by which buyers download a ticket (“boleto” in Portuguese) with a barcode, the details of the transaction, and a due date. This ticket can then be paid in cash at thousands of locations across Brazil, including ATMs, supermarkets, convenience stores, post offices, and banks.

Another widely adopted method that has revolutionized Brazil’s payments ecosystem is PIX. Launched by the Central Bank of Brazil in November 2020, it’s now being used by 110 million people – more than half of Brazil’s population. By simply scanning a QR Code on an app and entering a password, PIX enables users to carry out real-time transactions, 24/7, transferring electronic money between financial institutions such as banks or e-wallets. It’s become so ubiquitous that even street vendors and informal workers are now accepting PIX.

As in other Latin American countries, installments are very popular. By dividing the full cost of a purchase into smaller payments, they make expensive items more accessible to consumers. Over 50% of eCommerce sales in this country are done through installments, and a third of Brazilians won’t carry out a purchase if the seller doesn’t offer this option.

4. Deliveries can be lengthy and complicated

Despite developments in recent years, including the rise of logistics startups, parcel deliveries in Brazil tend to be longer and more complicated than in other Latin American countries, for a number of reasons.

Upon arrival, the first challenge is getting through customs. In theory, all crossborder purchases could be subject to taxation, and products that weigh less than 30 Kg or whose CIF (cost, insurance, freight) price is below 50 USD may not pay duties. However, in practice, the decision on whether or not to tax a product can become subjective and arbitrary. A seller whose items have previously been taxed is generally perceived as riskier, and thus is more likely to be taxed again.

Brazil’s customs authority, the Receita Federal, is known to be quite rigorous in its procedures. As a result, this process takes a few days and can be further delayed by incidents like the workers’ strike that took place the past month. When a product is held in customs, the Receita Federal charges duties at 60% of the item’s value or above, and if the buyer doesn’t pay duties within 30 days, the item will be retained permanently or destroyed.

Last-mile deliveries present additional challenges. 75% of goods in Brazil are transported via roads, yet 78.5% of roads remain unpaved and 60% of paved roads have inadequate conditions that make operational costs 31% higher. Another issue is cargo theft: Brazil registered 14 thousand incidents in 2020, and it is estimated that 80% of them occurred in the states of Rio de Janeiro and São Paulo. Although the numbers have been in decline since 2017, it’s still one of the main risks of doing business in this country.

For last-mile deliveries, most sellers partner with Correios, the state-owned enterprise that runs Brazil’s national postal service. Correios is one of the few companies that deliver throughout the entire country. Nevertheless, delivering with Correios has major drawbacks, such as long and unpredictable shipping times, bureaucratic dealings, and the risk of having your items stolen at pickup point.

Since most Brazilians are relatively new to eCommerce, many are still wary of buying crossborder. Some may be unwilling to pay exorbitant duties if their products are stopped in customs. Others might be frightened by online bank fraud: according to data from Serasa-Experian, Brazil experienced 3.8 million bank fraud attempts in 2021 – that’s one attempt every seven seconds.

Another common concern for crossborder purchases is the authenticity of the products sold. Unfortunately, marketplaces make it harder for buyers to know when a product is counterfeit, since sellers can post an image of the original product and then send their customers a fake one. In 2021, both Shopee and Mercado Livre were questioned by São Paulo’s Consumer Protection Agency (Procon SP) on the topic, raising awareness of the issue among the Brazilian public.

As a result, there’s a lot of mistrust towards sellers in marketplaces. When navigating through a marketplace’s catalog, visitors find dozens of sellers with unrecognizable names, who are nowhere to be seen outside of the platform and can’t be found with just a Google search. Because of this, buyers are increasingly turning to peer-to-peer platforms to find reviews on sellers and eCommerce sites, in order to know which ones are reliable.

The most well-known of these websites is Reclame Aqui, which allows its users to issue complaints against companies, receive customer support, and then rate their responses. Companies then get a score from one to ten according to their performance, which can be easily be seen on the company’s profile page.

The platform has over 30 million registered users and receives over 140 million monthly page visits, yet most crossborder sellers fail to appreciate its importance. Reclame Aqui plays a decisive role in the customer’s purchasing process, by providing information on the company’s reputation and the quality of its customer service. More than 90% of consumers in Brazil check this website, so make sure you keep a high score in order to boost sales.

If you want to build trust with Brazilian consumers, maintaining a high score on Reclame Aqui is crucial. To achieve this, you’ll not only need to offer customer service in Portuguese but also answer your customers’ questions regarding duties and product authenticity, as well as provide an effective solution to your customers’ complaints. Bear in mind that Brazilians are among the world’s most demanding consumers when it comes to customer support: 43% will spend as much time as needed to solve a problem if they know they’re right, whereas 41% will stop using a brand if the customer service is poor.

At nocnoc, we’ve spent the last years mastering eCommerce in Brazil. Not only did we build strategic partnerships to sell in the country’s main marketplaces, but we’ve also managed to build trust with them and thus maximize audience exposure on their websites.

Our marketing team knows how to target Brazilian consumers with the products that they want, at the right prices, with successful marketing campaigns, like the exclusive selection of our products promoted on Casas Bahia’s homepage. We don’t simply offer customer support in Portuguese – we offer a 360° service that includes pre-purchase, post-purchase, custom clearances, returns, and cancellations, which Brazilians already recognize, as our rating on Reclame Aqui shows.

If you register at our Seller Center, you can start selling in Brazil’s top marketplaces in a matter of hours, with a brand Brazilians already know and trust. You’ll be able to maximize sales without having to handle legal matters, translations, marketing campaigns, pricing, payments, logistics, or customer support.

We can show you how. Schedule a free session with one of our Brazilian experts by writing to us at sales@nocnocgroup.com.